Who doesn’t adore visiting beautiful places? It is said that beauty is everywhere in this world, and trust us, these streets outstand all and are a clear winner when it comes to pleasing your eyes or melting your heart. Whether small and grand or winding and imposing, walking through these stunning streets will surely take you to another world.

This street of Havana is all about pastel-coloured, vibrant buildings that line the glamorous street with contradictory elements merging into truly harmonious landscapes and making the perfect backdrop for a quintessential Cuba scene. Old Havana is at the heart of Havana and is roughly 40 minutes from the airport. The neighbourhood can be best explored by foot or by a pedicab. Take the shuttle bus services or rental cars to visit this street.

La Candelaria is a vibrant and lively district. This is the sole spot for all the Colombian bloggers for photos with beautiful streets, exciting street art, and colourful houses. La Candelaria is home to some of Bogota’s best attractions. The best thing to do is walk around and take in the architectural marvels. The easiest way to get there is through the city’s bus system that has stops at Museo del Oro and Las Aguas, with Museo del Oro being the most convenient transit. You can also catch a train or shuttle to get there!

For half a month during each spring, the magical passage created by the trees lining brings in tourists and photographers alike. Acting as a heavenly wrap-around, this happy street is known for its live music and lip-smacking local food stalls. The avenue is in Nordstadt, about 251 km west of Berlin. The neighbourhood is only 9 km away from Hannover Airport. You can take a bus or a train to Bonn from the airport. You can also take a train to the Bonn Central Train Station from the Cologne Bonn Airport. Whether you take a train or drive, it’s all worth it!

One of the iconic and most photographed places in Istanbul are the pastel-painted houses in Kiremit street that make a lively street scene. It’s a quiet and relaxing area to explore, away from the street bustle with cafes all around to instantly give you feel-good vibes. Balat is best to reach by bus or taxi. You can take a bus to the Fener Balat bus stop or take a boat to the Fener Ferry Terminal.

The Shambles in York

One of the most picturesque streets in England for aesthetic lovers, the Shambles has 15th-century buildings and narrow, cobblestone lanes with timber-framed architecture. Being one of the oldest streets, the buildings will remind you of old-school English movies. You can walk to the Shambles from King’s Square in the West, from the eastern end of Pavement, or a narrow alley north of Shambles Market. You can also take the bus on the Stonebow Interchange – service 9 at stop SA. You can also board the tube to the York Train Station. You can take a car to reach this mysterious street or explore on foot!

This street isn’t less Instagrammable with the shelter of colourful umbrellas, again making it a picturesque street. The vivid lane is found just off the main street, in the courtyard with bistros and sitting arrangements for people to enjoy the beauty of the street. This alley is located just off the courtyard of 21 Hlavna street. To get to Kosice, you can take the train, fly to the Kosice International airport, by bus, or even by car! Strolling is consistently the choice to explore this street!

Even the most summer-obsessed travellers are sure to fall in love with the wintry streets of Québec City. Its narrow cobblestone streets, soaring church spires, towering castle walls, and twinkling lights transform the town into an authentic winter wonderland that you’ll want to visit all year long. Petit Champlain is tucked along the base of Cap Diamant in Old Quebec, close to the banks of the Saint-Lawrence river. It is a short walk from the Quebec city cruise port as well as the marina in the Old Port. Since it’s a pedestrian-only street, you can climb down the steps or take the Funicular to get down to the street. Choose biking to explore this heavenly street!

The blue streets of Jodhpur are celebrated for their heritage and culture, pretty artistic streets, but above all for their signature blue-washed walls, which are a photographers’ paradise. The narrow lanes of the street are advised to be explored in the morning. These blue streets are allocated in the old part of Jodhpur city, with the majority of them being near the Mehrangarh Fort. The lanes are very narrow and can only be accessed through an auto, so leave your cars or taxis at the gate. There are plenty of walking tours, but if you want to explore these streets in their full authenticity, just ask the locals!

This calm mews is one of the most Instagrammed muses of London, with period features still intact, including the wrought-iron staircases leading to terraced balconies, original sash windows, along with the soothing colours. It’s just a beautiful combination of antiques and aesthetics. You can jump on a tube or a bus to get there. By tube, the nearest stations are Holland Park and High Street Kensington; both a 10 minute walk away from Holland Park. The closest train station is Kensington Olympia, which is a 15-minute walk away. The cheapest route from London City Centre is probably by bus.

This street is a living symbol of the city’s an­cient glory and turns into the core of Egypt’s cul­tural and religious life. A walk along the street is sufficient to take visitors back hundreds of years to the time of the Islamic con­quest of the country along with detailed architecture along the street. Located roughly 30 mins from downtown Cairo, Muizz street is at the heart of the old Islamic Cairo area and stretches from Bab Al-Futuh to Bab Zuweila. You can take a bus and the metro from Cairo Airport or alternatively, take a taxi to Muizz Street and stroll down the historical aesthetics of the street.

The Philosopher’s Path is one of the most magnificent exploratory walks with a trail of cherry blossom trees on either side. The lush trees ooze its beauty, making it the perfect backdrop for photos! But don’t forget to immerse yourself in the Zen environment and the gentle rustling of the leaves by the soft breeze. The street is accessible by a train from Kyoto Station to Marutamachi Station, followed by a bus from the Karasuma Marutamachi bus stop to Kinrin Shako-mae Bus Stop, which is only 5 minutes away from the Path, or at the Ginkakuji-mae stop.

The Golden Lane is a stunning street that would leave anyone who strolls along with it astounded. Situated in the heart of the Castle enclosure, which overlooks Prague, you would have to bend your back slightly and lower your head to enter one of the typical and picturesque houses built on the street. Getting to the castle is quite easy. There are several tram stops nearby – Pražský hrad, Pohořelec, Malostranské náměstí, Královský letohrádek – as well as two metro stations – Malostranská and Hradčanská. You will also need tickets to visit the Castle grounds. Travel by car but switch to walking and exploring!

Known for its Trulli, whitewashed stone huts with conical roofs, the streets of Alberobello reflect the Italian class and elegance at its best. One major highlight of this picturesque street is the beautiful sunset right behind it. The whole street looks so spectacular that it would be hard to take your eyes off. Whether you land at Bari or Brindisi airport, you will need to take a bus to the local railway stations and take a train to Alberobello. Although exploring Alberobello is easier by car, you can also make use of the public transportation system and explore the beauty of this place!

Rua Cor de Rosa or Pink Street is one of the most Instagrammable streets in Lisbon, known for its nightlife and, of course, for beautiful picturesque spots. In addition to a beautiful pink carpet spread along the street, you can stop by some amazing cafes and bars to enjoy. You can take the metro to Cais do Sodré and walk towards the street. You can also take tram 25 to the Praça de São Paulo stop. The easiest way to get to Pink Street is by public transport followed by walking and exploring!

This rainbow heart of Cape Town is all about distinctive multi-coloured rows of houses on steeply cobbled roads. Each house is painted in lively colour, which reflects the beauty because of its simplicity. Close to Adderley Street, this street is easily accessible by train or bus from the Cape Town International Airport. Bo Kaap is situated at the bottom of Signal Hill and is a 5-minute walk from the Cape Town CBD. It’s only a 10-minute drive from the V&A Waterfront as well. Moreover, this road is effectively available through bus or train followed by exploring on foot.

So, all the travellers out there, start picking your destinations and help the non-travellers, who are in complete awe after finding such spectacular places! 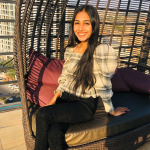 Just a random girl with a strong desire to travel the world and explore new things! Sucker for fashion and aesthetic!