Early 2000’s nostalgia is certainly hitting high roads: ‘Sex and the City‘ reboot is coming up, Jennifer Lopez and Ben Affleck are dating again, low rise jeans and chunky jewellery is everywhere, and a new episode of Friends — in this case, a reunion special has just premiered.

The highly anticipated Friends Reunion: The one where they get back together is the first time the six cast members of Friends – Jennifer Aniston (Rachel), Courteney Cox (Monica), Lisa Kudrow (Phoebe), Matt LeBlanc (Joey), Matthew Perry (Chandler) and David Schwimmer (Ross) – reunited on screen after a whole 17 years!

Here’s when we drop a spoiler bomb and consider this a major warning because, trust us, we have some serious revelations that will make you go Oh. My. GOD!

The one with the nostalgia

When the show opens in its first few seconds, we spot Ross (David Schwimmer) walk on to Stage 24 at the Warner Bros. Studio – the original Friends soundstage, the familiar keyhole frame from Monica’s apartment, the orange couch from Central Perk; one by one, we spot them all… “This is where Jen and I had our first kiss, that’s where Lisa played the guitar,” blushes Ross.

“Remember when we all could fit in through that door,” laughs Rachel (Jennifer Aniston), as they talk about the memorabilia that they took from the set on the last day of filming…“I am getting chills,” says Joey (Matt LeBlanc) as he looks around. Just so you know, Phoebe (Lisa Kudrow) took off with the cookie jar from the top of the fridge, Rachel (Jennifer Aniston) took home a neon-coloured mug, one of the balls from the foosball table was taken by Joey. The iconic theme song “I’ll be there for you” sums it all up.

We loved how the six friends started remembering the times that had gone by. Like Joey and Chandler recreating the moment where they cling to their armchairs and refuse to get up.

Ross got back in the quizmaster mode, featuring both actual questions from “The One with the Embryos”, the famous quiz episode and new questions designed especially for the reunion. LeBlanc immediately knew which hands belonged to the person who actually played his hand twin, Thomas Lennon and Mr Heckles (Larry Hankin).

The one with the backstory from the creators of F.R.I.E.N.D.S

David Crane, Kevin S Bright and Marta Kauffman, the three creators, are the highlight of F.R.I.E.N.D.S: The Reunion episode. They talk about the show’s behind-the-scenes moments. The most interesting is the story behind the casting of the main characters. The creators of Friends had specifically written Ross Geller’s character for David Schwimmer, which was not the case with anybody else in the main cast. But, David, at that time, had quit television and gone back to the theatre. The makers begged him to come on board, which he eventually agreed to. That’s how David Schwimmer became the first person to be cast on the show. Lisa Kudrow reportedly had nailed her audition, while Matt LeBlanc had only 11 dollars in his wallet when he auditioned for the part of Joey. Matt LeBlanc shared a fun anecdote about being drunk and hitting his face on the toilet seat between auditions and still managing to land the part. The creators also made a shocking reveal that casting Rachel was the toughest job and took them a long time. Jennifer Aniston was a perfect fit for her part, but she had to initially divide time between shooting for Friends and another show, which she eventually quit. Courteney Cox was initially approached for Rachel’s part, but she felt she fitted better as Monica Gellar.

The creators also made revelations on how they had planned for Monica and Chandler to only have a one-night stand, but the unending cheers from the live audience on set convinced them to make the two a couple.

It was the presence of creators Marta Kauffman and David Crane in the audience that made the cast troop down for a hug, but it was Elliot Gould and Christina Pickles (Jack and Judy Geller on the show) who brought on the tears when they said that they considered all the six of friends to be their children and “looked out for them like parents’’.

The one with big revelations aka spoilers

While most of the cast have gone back and watched all the Friends episodes, only Lisa Kudrow (Phoebe Buffay) hasn’t. She added that she found the show “traumatising” to watch.

Lisa Kudrow, in the reunion episode, said: “There are seasons I’ve never seen. Michel (Lisa’s husband) and I started watching some parts of season four, which I thought I had watched. Michel enjoys them more than I do because I’m mortified with myself.”

David Schwimmer also said that it took him 17 years to watch the series, which he later somehow managed to do with his daughter.

Matthew Perry, aka Chandler, revealed that he had moments of extreme anxiety on set when the audience didn’t respond to a line or a joke from him. “I thought I was going to die,” a huge revelation to his shocked former co-stars.

Ross revealed that he might be madly in love with Marcel, the monkey, but David Schwimmer hated it in real life.

All the six members of the cast had almost every meal together and watched the show together.

“We are family,” they said and claimed to stay in touch. “We all know that every time you call or text someone, they will call up,” said Lisa Kudrow. Matthew Perry, aka Chandler, summed it up with his sarcastic tone, “I don’t hear from anyone!”

Jennifer Aniston and David Schwimmer crushed hard on each other while we were busy thinking Ross and Rachel were on a break!

Jennifer Aniston and Schwimmer, in the reunion episode, spoke of their admiration for each other when asked whether any of the cast members ever had romantic feelings. David Schwimmer said they would “cuddle and fall asleep on the couch together” while filming Friends as both had accepted the fact that they ‘crushed hard’ on each other. “At one point, we were crushing hard on each other, but it was just like two ships passing because one of us was always in a relationship. And we eventually never crossed those boundaries,” added Schwimmer.

All this, despite the male actors signing a ‘no dating pact’. The men shared this in an interview before the reunion episode aired on Thursday. “If we were hooking up or there was anything weird going on, that may screw with things.”

Matthew Perry told Access, according to Fox News, “We didn’t want to damage any of the friendships we had made, so we preserved it.” David Schwimmer continued, “It was an unspoken rule.” Matt LeBlanc added, “We are like siblings.”

The one with the special guests

When Lady Gaga hit the screen, the 35-year-old Poker Face singer joined Lisa Kudrow to perform “Smelly Cat,” the iconic song Phoebe often sang. Lady Gaga thanked Kudrow, 57, for being “the different one” — and the one who was “really herself” — among the Friends characters. David Beckham referred to himself as “a definite Monica” because he’s a cleanliness freak, just like the character. Malala Yousafzai arrived with her best friend, who characterised Malala as “Joey with a tinge of Phoebe” and whose favourite Friends moment is Monica and Ross doing “The Routine.” BTS, the sensational South Korean boy band, made an appearance, as did Kit Harington from Game of Thrones, who said he always felt like he was a part of the Geller family, “Always neurotic and wearing very tight pants.”

Others who appear in this mega reunion are Justin Bieber, Cara Delevingne, Elliott Gould (who played Ross and Monica’s father), Mindy Kaling, Maggie Wheeler (the infamous and much adored Janice), Thomas Lennon, and Cindy Crawford.

The cast revealed what they think happened to their characters

For Ross and Rachel, Jennifer Aniston says they got married “and had some kids, and you’re still playing with bones,” a line that puts LeBlanc in stitches. Although Monica and Chandler’s kids are likely now graduated, Monica is still “really competitive” and active in the PTA, and Chandler obviously is making her laugh every day; I KNOW RIGHT! According to Lisa Kudrow, Phoebe is still happily married to Mike and living in Connecticut. “They had kids.” And Joey, how’s he doing? Well, LeBlanc says he’s opened a sandwich shop somewhere in Venice Beach.

Let us know in the comments about your favourite moments from the reunion! 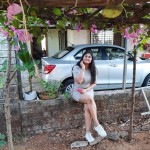