Sutharshini Koneswaran is a 24-year-old singer hailing from Trincomalee, a port city on the northeast coast of Sri Lanka. Sutharshini is such an underrated singer with a euphonious voice that I cannot stop listening to her despite not knowing Tamil. Sutharshini has a medical condition called Albinism. Albinism is a rare group of genetic disorders that cause the skin, hair, or eyes to have little or no colour. From Albinism to an obstructive family, her journey has not been a bed of roses. However, none of this has ever refrained her from being optimistic and pursuing her dreams. Take a look at some excerpts from the interview.

How did you spend your time during the lockdown? What is your favourite hobby?

Practising, practising, and only practising. Most of the time I spent in this quarantine was on singing practice. Since the 7th season of the reality TV show, Superstar Singer also came up simultaneously; I spent my time researching songs and working on my vocal perfection. So, my preparation has become my hobby as it’s my favourite thing to do.

Do you have any musical roots? Do any of your family members have a musical background?

There are no musical roots whatsoever. I would say it is all because of my dad. He is a huge fan of music. I have been waking up to music every single day since childhood. My dad used to go around carrying a radio when music cassettes were a big deal to get hands on. Every morning I have been waking up to music from the 70s and 80s since childhood, so I have gotten used to classical music. This is why I started loving music, and now it is such an important part of my life.

Are you a professionally trained singer?

A big no! I never took any music classes or professional training until I was 10 years old. But, around the age of 10, I joined music classes and did my grade 2 in Carnatic music. I also joined classes for musical instruments – Veena & Violin. I don’t remember anything from those classes, though. If someone asks me to sing a Carnatic song or play veena or violin, I seriously won’t be able to do so.

Your words and pronunciation of Tamil are crystal clear. Is it because of your Srilankan native, or have you practised to get that perfection?

As you know, Tamil is one of the hardest languages to learn. At first, I had no proper pronunciation when I started singing; I made loads of mistakes with words. I used to listen to original songs repeatedly to understand the right way to pronounce those words or at least be somewhere close to them. This was before the show. We had a special training workshop by a playback singer, V.V Prasanna, who was our vocal trainer. I have learned so much from him and hopefully gotten better with my words as well. Although, as I said, a lot of hard work is required to be fluent in Tamil.

Tell me about your experience in the show, Superstar Singer.

Superstar Singer show was never my plan. There was a 2-day audition for the show in our place. However, I didn’t go on day 1 as much as I was interested in going. My parents were not happy about these TV shows and stage performances. I then convinced my parents on the second day and somehow went for the audition. I assumed I wouldn’t get selected, but to my surprise, I did get selected. I attended the workshop with the director of the show, Mr Dinesh. He was very supportive and encouraging. The entire team was outstanding; there was no tension concerning competition. We had lots of fun every time we were on the set. I made good friends.

“She is always playing around with other contestants on the set. Every time I see her, she is either playing or eating, there are times she even teaches me how to dance on the set.”says Anidha Ursula (Dance Choreographer at the show)

Who’s your inspiration when it comes to singing?

I wouldn’t say it is someone in particular. I like the individuality of every singer. For example, I would say I like Shankar Mahadevan’s style and stage presence, S.P. Balasubramaniam’s voice and energy, Chitra’s smile, S. Janaki’s small expressions and variation inside every song, Sid Sriram’s unique voice and style of singing. Like this, I can go on and on about every singer. I find everyone unique in their own way, and I like something or other about everyone.

Do you compare your voice to any famous singer? Has anyone ever told you that you sound like a certain singer?

Ahem! No, I have never thought of it, and nobody has ever told me that I sound like a certain singer. I mostly get compliments like, “I sing close to the original song.” That’s all I have ever got. Even if I need to compare myself to someone’s voice, I really do not know how to do that either.

The cover songs that you have uploaded on your page are considerably tough songs to sing. Did you go ahead with those songs to challenge yourself or simply because you like those songs?

I never choose that way. Whatever song comes to my mind, I randomly sing that. To be honest, I never wanted to post any of those covers on my social media. My friends believed they were good and convinced me to do so. But when I started getting appreciation from a lot of people, I started to post more videos. So, there is no plan as such. It just depends on the mood and what comes to my mind.

Is your family supportive of your singing career?

To be honest, my family does not support this one bit. They never let me out of the house. They don’t like TV presence, media, and going out of the house to perform in front of people. But, they know I love singing. They have changed a little bit compared to earlier. I hope they support me more in the future. Fingers crossed!

Is this the career you want to pursue? Do you have other plans for your future?

That is a question to which I don’t know the answer myself. I want to make this my career since it’s something I love to do. It’s a competitive field and needs so much hard work and support. So, for now, it’s a big question. I need to find an answer to it soon.

Will you focus more on the film industry or be an independent musician since this is now a new trend?

I have no idea. I think this completely depends on the kind of opportunities I get. I have experienced singing for an album previously, and I would love to collaborate with independent musicians. And, if I am lucky enough to get an opportunity in the film industry, I would most definitely say Yes!

Tell me about your medical condition. How did you fight it in a judgmental society?

I have Albinism. A genetic condition where people are born without the usual pigment (colour) in their bodies. People with albinism have ashen skin, hair, and eyes, as you can see. Children used to get scared of me when I was a kid. I have a very positive attitude towards my medical condition. I think I am special. My family supported me so much on this, especially my dad. He gave me the strength to overcome my fear. Up to a certain age, I didn’t realize that I had a problem. I am so, so blessed to have good people around me. This condition comes with an eyesight issue. Even at the show, they supported me and provided special care. So I managed it quite well.

“She was a motivation to people. She gives loads of confidence to other people with respect to what they can achieve despite having problems.”Says Anidha Ursula (Choreographer)

Many people on the internet mistake you for a foreigner. How do you react when you see such comments?

Everyone calls me Olivia Peterson. When someone uploaded my video on YouTube with the title ‘Tamil song by a foreigner girl’, I found it very funny. I also took it sportively. I feel really, really happy when people share my videos.

What would you like to tell other people who are fighting various medical conditions and those who are shy to be on public platforms?

This means the music never requires your shape. What you deliver is all that matters. It’s not my mistake that I took birth this way. I can only correct the mistakes I make now. No matter what your dream is, never let anything come in your way, not even your own body. Never overthink what other people think about you. What you think about yourself is what matters the most. 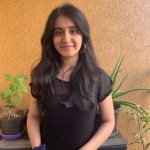 A student journalist obsessed with earrings and animals