Feminism. Does that word make you raise an eyebrow? Or does that glue you on to the screen instead? Either or none, I’m sure you are as sure as I am that this eight letter word is a hot potato that has received slack upon slack since ab initio. There are a number of misconceptions and stigma attached to Feminism and those who relate themselves as Feminists. The sad part is, most of these are based on the prejudice pinned upon and normalised.

Feminism is not a ‘one size fits all’ elastic, it comes in so many ‘different shapes and sizes.’ To quote one of the frequently used analogy, it is like water that takes the shape of the container it is poured into – a barrel, a jug, a bottle, a glass, a spoon. Feminism is fluid. It has a plethora of subsets and subcategories, one of which is ‘Intersectional feminism.’ It might not be an alien term to most of you, and if it is, it’s never too late to know.

Maybe the analogy of the deck of 52 cards will elucidate it better, here’s a little context – four symbols with thirteen cards each, starting from the Ace which takes the topmost position followed by the King, Queen, Jack, and the numbers from 10 to 2. Say, each symbol occupies a position of superiority- Spade comes first following which comes Club, Heart and Diamond. Given that, we see that Spade Ace is the most powerful and the least powerful card is Diamond 2. But Heart Ace, although it is powerful than all the other cards with Heart symbol, has less power compared to Spade 2 although two is technically lesser than Ace in the hierarchy. Similarly, although all 2s have the same inherent value, Spade 2 is the most powerful compared to the other 2s and Diamond 2 is the least powerful.

Here, every card is a part of the deck and that is what unites them in the same fashion that Feminism brings under its umbrella women, generally. But, each of the cards has two identities pertaining to the symbol (Spade, Club, etc.) and the value (Ace, Jack, Ten, Two, etc.) and in the same way, it is the multiple identities that every women – be it cisgender or transgender – bear that determines their level of power and oppression within the hierarchy. These intersectional identities are what ‘Intersectional feminism’ holds under its wings.

While India had feminist figures like Gargi, Queen Didda, and Bibi Dalair Kaur in precoloprecolonialnial times, feminism in colonial India was initiated with its first watershed movement – the abolition of Sati. Commendably, the first wave of this movement was spearheaded by men like Raja Ram Mohan Roy, Ishwar Chandra Vidyasagar, DD Karve, Mahadev Govind Ranade, and Behram Malabari as much as it involved women like Anandibai Joshi, Kamini Roy, Kadambini Ganguly, Muthulakshmi Reddy, and Pandita Ramabai. Although it is possible to pass a judgement that most of these individuals belonged to affluent sections, on a closer look we find that the issues they addressed were wide-ranging and overlapping – laws pertaining to divorce and child custody, dowry, harassment at the workplace, rape, land rights and inheritance laws, political representation and many more. In 1974, the ‘Towards Equality’ report presented by the Committee on Status of Women shed light on the socio-cultural, political, and economic practices in the country because all these factors are –  interconnected, interrelated and above all, intersectional.

If sex-selective abortion and female infanticide was a product of religious and gender bias a century or two before, today it is a result of gender, religious, economic, and cultural factors. Honour killings and associated feminicide have been a detestable yet persistent streak in the Indian culture, which has followed more or less the same pattern. If the denial of certain jobs to women and consequent confinement was a problem that stemmed from the unequal power play based on gender and culture half a century ago, the stereotypical career options imposed on women and discrepancy in payment with respect to male colleagues is a by-product of the imbalanced gender, economic and socio-cultural power play.

In the twenty-first century, however, Intersectional feminism has developed into a salad bowl that gives room for issues faced by transgender men and women, men from the LGBTQ+ community, and those subalternised by physical or social handicaps and those whose identities are on the verge of erasure. It is in this context that stories of those like Jamshed from Kunal Basu’s ‘Kalkatta’ come to the picture, being a refugee-migrant lower-class sex worker facing multiple marginalisations despite being a cis male.

The religion of the Body (Sexuality)

For ages, the female body has been a popular metaphor worldwide. From regarding the nation as Mother India or ‘Bharat Mata‘ to considering every Indian woman as a site of possession and rebellion, we have come a long way.

Before colonisation, women were bartered as gifts in exchange for territory by and between monarchs or as the price of a peace treaty. They were seen as epitomes of family honour and possession. Intersectionality, with regard to physical oppression and exploitation, has evolved – from Draupadi to the Dalit girl. In the ancient epics, Draupadi is shown as a female figure who was disrobed in a court by those who saw it as a means to disgrace her husbands. During the dark days of partition, women’s bodies were sites of violence. Fast forward to this decade, eight year old Dalit girls are raped and murdered.

In all these cases, gender was the primary reason for exploitation. Draupadi, despite being a queen, was violated in front of her husbands who were as powerful as her violaters. She, on the other hand, was powerless on account of her gender. On the other hand, the victims of partition violence were overlapped with identities of religion (Muslim and Hindu) and nationality (Pakistani or Indian) on top of gender. To them, feminism meant not just a break-free from gender diaspora but also from the tentacles of religion and nationality. The factors of vulnerability the caste hierarchy. The trials and tribulations that Feminism fights against becomes broader with the number of factors affecting it, and this versatility makes Feminism intersectional.

Entrenched deep in the Indian society’s fabric is the caste system. More or less similar to racism in the West, caste is division of people on the basis of four main Varnas and outcastes. Apartheid towards the lower castes and Dalits have been as old as their existence. The history of this biased politics has not done anything but worsen over time. Abuse and violence against women belonging to the lower castes or those whom we call Untouchables is seen as a way of controlling them and maintaining the caste structure even today, propagating the status quo. It is seen as a tool of domination and control. Assaults against women have also been used to play roughshod over the Dalit men by implying that they are incapable of protecting their women, and also to show that they are owned by the masters to an extent.

In one of the cases, a Dalit girl was raped by an upper caste employer because she asked for a 3 Rs. hike in her wage. In the infamous Laxmanpur-Bathe incident of 1997, several Dalit women were assaulted and mutilated in order to punish their men who were hiding from the Police. It is the vulnerability of the caste that they belong to that ensnares their gender identity even more.

Research has shown that a minimum of four Dalit girls/women get sexually assaulted in India every day. In this scenario, the women become subjected to oppression on grounds of their caste as well, i.e., their gender discrimination takes a graver turn as it is aggravated by the caste they belong to. This history of caste politics has been a challenging and lasting one. Its essence hasn’t changed, yet the forms and modes have. Worse than this sad reality is the fact that the women stand a more disadvantaged position compared to their male partners.

The politics of Economics (Class)

Education and work sphere have impacted the social status of women and as a result, the degree of gender bias they face. Although that might seem like a good thing, it is not possible to overlook the challenges and jeopardy women face on the basis of their gender in the work space, such as underpayment and underestimation. But in most cases, women are not privileged to get education in order to work, they are instead physically limited to the house. Along with the physical estrangement, mental and social discrimination takes place at the same time, as a result of factors like religion, culture, society, class etc. Drop out rates, low literacy rates and prevention from pursuing studies have jeopardised the future of many promising women. What is worse is that these have in turn set into motion a chain reaction where one thing leads to another, say, lack of education leads to ignorance and less economic development. Illiteracy, clubbed with financial deprivation makes the perfect breeding ground for limiting inheritance laws and exploiting women.

Even today, in certain societies, women are expected to confine themselves to the private sphere and be resourceful in the kitchen. This not only denies their potential downright, but also makes them subordinate to the earning members of the house who are men. Unlike female counterparts who earn an income of their own, these women have to depend on their spouses for economic purposes. They do not have economic or financial independence and this makes them more vulnerable to abuse as they do not have a voice, consequently.

This politics of Economics that have a direct bearing on the power play within the household and eventually in the society is one of the key aspects of Intersectionality. In this case, Feminism involves fighting for basic rights such as – right to education and right to economic independence, all on the grounds of gender. In a nutshell, Intersectional feminism, coined by lawyer and critical race theorist Kimberlé Crenshaw in 1989, is an all encompassing halo which holds within its circumference different sections that share a common ground called gender.

Marginalisation, double marginalisation, triple marginalisation. The extent of marginalisation depends on more than one factor and Feminism, being as accommodative as it is, doesn’t cover the aspect of gender alone, contrary to the standardised notions. It is based on the premise of gender equality, and the framework of Intersectional feminism looks at the various factors (race, caste, class) that add to oppression and inequality along with gender. It focuses on the pattern of overlapping and intersecting identities that hamper or help certain groups of people over others, that lessen or intensify the gender diaspora. 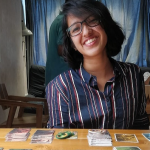