For a country like India which is predominantly populated by dark-skinned people, colorism is a problem which seems unlikely; but that is far from the truth. Colorism is defined as the prejudicial or preferential treatment of same-race people based solely on their colour. It essentially means the preferential treatment towards light-skinned people of colour over their dark-skinned counterparts.

For the longest time in India, beauty and fair skin have been treated as one and the same thing. Indians have been conditioned over centuries to view white skin as “beautiful” while darker skin is treated as “unclean” or “dirty”. It is important to understand where this stems from – after all, it is only after you understand the cause that you can solve the problem.

INDIA: AS A POST-COLONIAL COUNTRY

Indian colorism finds its roots in a multitude of reasons, colonialism being primary among these. India was colonised by the British for almost 200 years following which Indian society saw an increase in reverence towards the European ideals of beauty, i.e. light skin, sharp features and a slender figure. This cultural reset is one which is not unique to India but is widespread to the whole world, an unfortunate residue in a post-colonial society.

Indians under British rule were forced into subservience, forced to accept “white skin” as “superior” and Indian skin as “inferior”. Lighter skinned Indians were treated as “allies” to the British whereas darker-skinned Indians were treated like dirt. It was but inevitable that this thought process would seep into the grounds of Indian society, only to be perpetuated for the decades to come.

While an erroneous stereotype is that people from lower castes have darker skin, there is no direct link between caste and the colour of one’s skin. It is important to remember that the colour of our skin is largely determined by our location and not caste or class. However, we must not forget that India is an agrarian economy (based on agriculture) and as a result, a majority of farmers and workers work for endless hours under the sun due to which they have darker skin. Since dark-skin is already looked down upon, this further contributes to the poor treatment of lower castes.

We, as Indians, often choose to hide behind the argument that we cannot be racist simply because we are brown ourselves. However, we fail to realise that one does not necessarily need to “be racist” to discriminate against someone for being a darker colour. Colorism as a concept is foreign to us and that plays a role in us effectively dismissing any, intentionally or unintentionally, discriminatory remarks we might make.

“Don’t go out in the Sun, or you’ll become darker” and “Don’t drink too much chai or you’ll grow dark” are undoubtedly statements that so many Indians have heard throughout their lives.

It is necessary to mention schools and the role they tend to play. If I look back on art classes taught in lower grades, there is a distinct memory of a lighter-than-most-skin-shades crayon that was bestowed the title of “skin colour”. While this went unquestioned earlier, it poses the question: why are students being taught that there is only one “right” shade when it is our diversity which makes us who we are? Why are impressionable children being taught this rhetoric? Perhaps, it is this unconscious rhetoric that makes children think it’s okay to mock someone for their skin colour by calling them derogatory terms.

It’s a common sight in Indian matrimonial ads to find a call for “fair, homely well-educated” girls. While such “requirements” are regressive in their own right, it is important to remember that the “qualification” of “being fair-skinned” does nothing but perpetuate the existing caste and class divides in society today. It serves as a rigid boundary, effectively differentiating and preventing the intermingling of different communities.

BOLLYWOOD AND PERPETUATION OF COLORISM:

This bias is not only seen in our daily lives but is present in the media we consume as well. It is a well known fact that a majority of actors and actresses in India are of a certain shade, and they are usually known to endorse “skin-brightening”, “skin-lightening” and fairness creams. This abject dismissal and lack of representation of dark-skinned Indians in the entertainment industries is difficult to ignore.

Indian movies often portray the main characters (usually, fair-skinned) facing off against the villains and negative characters in the story, a role usually enacted by a brown-skinned man. When it comes to playing characters that might reside in villages or small towns, the choice to forego casting dark-skinned actors and instead opting for light-skinned actors “made darker” by use of makeup, is hard to ignore. Be it Bhumi Pednekar in Bala, Hrithik Roshan in Super 30, or Alia Bhatt in Udta Punjab – the change in their normal skin tone and the one they have adopted in the movie is unmissable. It is also not easy to miss the glaring stereotypes and co-relations to social class these film-makers seem to be perpetuating by their casting and makeup choices.

While film-makers are eager to write stories and make films on these sections of society, they seem to practise a flippant disregard for doing justice to them by casting appropriate actors in said roles.

In 2019, the Indian fairness cream market was reportedly worth around Rs. 3000 crore (approx. Rs. 30 billion). Several brands marketed products under the guise of “skin-brightening”, “lightening” or products that would “make you glow”. Advertisements for these products often showcased men and women go from being unhappy (while a darker shade) to gaining success and praise as soon as they become a shade or two lighter.

In July 2020, Unilever decided to change the name of its widely-selling skin-lightening cosmetic product from ‘Fair & Lovely’ to ‘Glow & Lovely’ in a bid to appease their consumers after years of drawing flak from Indian audiences for promoting colorism. Unfortunately, this move (to change the brand name) is as superficial as the bleach-containing skin-lightening products they sell. Changing the name of the product does nothing as the premise (of lighter skin being better) still remains.

We have spent our entire lives internalising these very prejudices, and understandably, it will not be easy to shed these ideas in a single day, especially when there is a billion dollar industry backing them. But knowledge of their harmful existence should be enough to make us question the colorist attitudes we are presented with on a daily basis.

Why is it this proximity to whiteness which has become the ideal when it comes to our skin colour? It makes you wonder, doesn’t it – it’s been over 70 years since the British left our country, but for some reason, we are still chasing the beauty ideals they set for us. 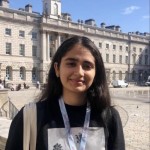 A second-year English Literature student with a penchant for procrastination and long walks.