Dreams and dedication is a powerful combination. Virat Singh, a left-handed Indian batsman, shows the signs of a sportsman who takes possession of this union. As a young boy, he dreamt of becoming a cricketer and has been persistent on that path. The 22-year-old, who hails from Jharkhand, made his domestic cricket debut in 2012–13 edition of the Vinoo Mankad Trophy. Later on, he played on the senior side matches for his homeland in the 2013–14 season. Singh captained the under-19 team in the Cooch Behar Trophy at the age of 16. In the tenure of six years, he has played 125 domestic matches. The middle-order batsman showcased outstanding performance in the Syed Mushtaq Ali T20 Trophy, making himself a rightful candidate in the upcoming IPL season.

Talking of his most recent attainment, Singh was signed by the Sunrisers Hyderabad for the 13th edition of the Indian Premier League to be held in Dubai from 19th September 2020. In an exclusive interview with Brown magazine, the Indian cricketer spoke about his experience of being on the field with his idol, the former Indian international cricketer, MS Dhoni, his foreseeable debut in the Indian national team and much more.

What kept you motivated during the lockdown?

First of all, the fact that I got selected to play for Sunrisers Hyderabad in the upcoming IPL season. Keeping that in mind, I have focused on my fitness rather than being at ease. I have lost 4-5 kgs during this period. I knew cricket would resume soon, so I worked diligently on myself. Also, this lockdown has given me time to heal from a lot of injuries. Although we know it’s undeniably difficult for some people in the country and the whole world. It hasn’t been too bad for me.

Cricket is set to resume in India with IPL 2020. Are you excited or nervous about your debut?

To be honest, there is no such feeling. I am just looking forward to the league. We’ll meet all the players and the coaches soon. I am not thinking of anything for the time being and just waiting for the camp to begin next month. We have to reach Dubai on 23rd August, and then we’ll be put in quarantine for the next six days and thereafter, 19 days of camp. So, let’s see how that goes.

How different is it going to be for you to play in the UAE?

Well, it’s a subcontinent, so the conditions are good, pretty much like India. I have been tracking the forecast, and the weather is slightly hotter than India. However, we will be playing the majority of the matches later in the evening, so that will be an advantage. The pitches are going to be similar to India, and I have previously played is bad conditions as well. I believe it’ll be alright.

Playing a tournament amidst a pandemic can be taxing. Are you worried?

Speaking about my fitness, I have taken it up a notch. So I don’t think it is going to be physically challenging. Recently, I took a Yo-Yo test and scored almost 18.4; it was 18.2 previously, which is pretty good. The kind of effort that I have put in so far will surely benefit me. Ever since IPL 2020 was announced, I began to practice in the hot condition, during the afternoon so that I can get used to the heat as well. The area that I lack is the match practice, I would say. But the 19-20 days camp in Dubai will certainly be beneficial. The camp would be, more or less, helpful for everyone. Of course, the players who have been playing in the Caribbean Premier League have had their share of practice, but we have to gain from the camp itself.

What are your thoughts on ICC’s new players’ guidelines?

About the biosecure bubble, we have seen the execution in last month or so in England. They have played against West Indies and Pakistan, and it seems to have been successful. But that’s just two teams we are talking about. It is going to be slightly challenging in the IPL because there are eight teams involved. A lot more people, even the supporting staff, will be present. Since there are fewer cases in Dubai, I believe everything will be okay.

You were picked for the Jharkhand U-19 team at the age of 14. What was the feeling of being part of the team?

That happened eight years back. I have to recollect. By that time, I had the experience of playing in the U-16 team for three years. I started pretty early. I was still in school when I got selected. In the initial year, my brother was the captain, so it was helpful for me. It was a kind of extra support. Before getting into the U-19 team, I was the captain of the U-16. I had both the experience and confidence. Also, I had the backing of the coach, my brother, and teammates, so it was a decent season for me as far as I remember.

In the 2013-14 season, you were leading Jharkhand in the Cooch Behar Trophy. How did you take up such a responsibility at a young age?

I had already obtained the captaincy at the local leagues. MS Dhoni, who has always been my idol, was someone I watched and learned the art of leadership. Even Mr. Rajiv Kumar, my coach back then, guided me well through it. As far as I remember, I had a decent season.

MS Dhoni recently announced retirement from International cricket. He has been your idol and you have played under him. Describe your experience.

It’s a piece of sad news for the people of India. I think, if we make an ensemble team of all-time favorite players even after 100 years, he would be chosen as the captain. His contribution to Indian cricket is unforgettable. I consider myself fortunate to have played under him. I have learned a great deal from him, and I continue to do so.

I played with him into consecutive season from 2016 to 2018. He played for Jharkhand for those two seasons. It was incredible to be in the same dressing room as him. I am an introvert, so I don’t ask a lot of questions. And when a player like him is present, a junior player like me gets a bit shy, that’s quite natural. However, I tend to observe and learn things. I did follow him on and off the field. He has always been there to answer our queries and guide us. He would form hypothetical situations to explain to us exactly what needs to be done when we are stuck. He is the legend of the game. We all look up to him.

How was your experience playing alongside Washington Sundar and Rishabh Pant in U-19?

Back then, I wasn’t aware that they were going to be a part of the team. I was the captain of the team that year, and they played under me initially. Unfortunately, I got dropped off from the under 19 World cup squad. I don’t know what happened; maybe it was just part of my destiny. Talking about Washington and Pant, I am glad they got that break. I hope they keep performing well and bring pride to the country.

What is your take on racism? How can sports help in fighting such issues?

Talking about the players, I don’t think they think about it that much. I am brown, and I have played in the United Kingdom but didn’t face any discrimination. I am glad I was in a place where they respected me. To be honest, I have never experienced it. But I think it’s about getting educated when it comes to such issues.

What inspired you to choose cricket as a career?

It was all clear to me at a very young age. My cousins used to play in the backyard, and I joined them; that’s how it all started. They, too, took up cricket as a profession. My elder brother followed the same career path, so cricket was always there in the family. I was certain that I wanted to become a cricketer. Once I got selected for the under 19 team, I knew I had to invest more time in the game, so I discontinued my schooling.

No parent wants their child to leave their studies and take up sports. At least that’s how it is in India. Majority of them want their kids to study and become an engineer or a doctor. Initially, my parents weren’t supportive, they wanted my elder brother to play and wanted me to study well. Eventually, when I started performing quite well at the district level, they realized that I have the talent and can make it. Once I got into the state team and became the captain it was clear to me that this is all I wanted.

Vishal Singh, your brother, is also a professional cricketer who plays for Jharkhand. What kind of relationship have you shared with him on and off-the-field?

We both have always been very supportive of each other. I have played under Vishal’s captaincy and I got that extra cushion because of him. Also, we constantly keep challenging each other. Off the field, we often try to spend the most time together. Since I am not traveling anywhere currently in the lockdown I got a lot of time to spend with him.

When will we see you in the blue jersey?

I have got two IPL seasons in approximately seven months. This season has been pushed to September. I am assuming the next IPL season will begin in April. India is in search of a middle-order batsman. Last season, I played in the middle order in the whole domestic circuit and performed well. According to my preparation and the work that I have put in, you never know, two good IPL seasons and I might get into the Indian team. I have prepared well so it’s just the matter of executing all plans now. 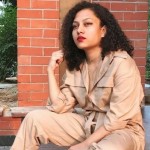